Percent of people in Japan who don't know Christ

When Luke Standridge packed his bags for Tokyo, Japan, he said goodbye to his dreams of becoming a composer. After all, foreign missionaries don’t really make it big as musicians. “I‘d wanted to be a Hollywood composer for as long as I can remember,” Luke says. “But God had to bring me to a place where I was willing to give up music. [Arriving in Japan], I never expected to do music again.” God had different plans.

Luke threw his efforts into language and culture studies with the support of his organization, TEAM. As he did, he began connecting with locals, including a well-known Japanese composer named Haruki*. Within three months, Japan was in a state of emergency due to COVID-19, and Luke—still adjusting to life in a foreign country—was seeing the Lord combine his love for missions and his love for music in an extraordinary way.  Haruki and Luke got to know each other and began partnering on projects. As a result, Luke got to co-write music for a major TV show and a movie—using each opportunity as a bridge to share the gospel. “It all culminated at a Christmas dinner at the end of 2020,” he remembers.

Luke recalls feeling intimidated that evening. He was to dine at one of the world’s finest restaurants with some of Japan’s most famous men. But Haruki greeted him warmly when he arrived, and—to Luke’s surprise—pointed to the seat at the head of the table. It was the seat of honor, and Haruki had saved it for Luke. As they dined, Haruki asked Luke to help him with music for an upcoming Pokémon movie. Stunned, Luke said yes. But it wasn’t the opportunity to contribute to the largest grossing media franchise that really shocked him. It was what Haruki said next. “‘Luke, you’re here on a ministry visa,’ he said. ‘When you told me about it, I was so intrigued. Why don’t you tell everyone.’” So, right then, Luke began sharing the gospel in Japanese.

It was a crazy night during a crazy year—one Luke is incredibly grateful for. “The gospel opportunities that music has brought are remarkable,” he says. “God is priming the pump now in Japan. The culture is becoming more open; people want hope.” It’s a hope that Luke himself is clinging to more than ever. Being a Christian in Japan isn’t easy, especially in a pandemic. “But in the midst of missing [my life in America], I wake up with so much joy and excitement,” he shares. “And having my community from College Park is really awesome.” Luke frequently gets messages from church members who are praying for him and for Japan. It encourages him and reminds him of the responsibility of what God’s entrusted to him—an incredibly unique platform upon which he can share the gospel. “My hometown has fewer people than College Park,” Luke says with a laugh. “I grew up in the cornfields. Now, I am in the biggest metropolitan city in the world. If God can use me, he can use anybody.”

*Name has been changed for confidentiality.

Meeting Needs on the Frontlines

The work that medical professionals have done over the last year has been nothing short of heroic. Brittany Murray, a College Park Church member, is one such example. Brittany is a medical professional at Community North, working with patients recovering from the aftereffects of COVID-19. As the virus gripped the Indianapolis area last year, Brittany and her coworkers sacrificially worked long hours, tirelessly serving. Many of them were even living in separate spaces in their own homes, quarantining to protect their families.

Through a series of connections with the medical ministry team at the church, the Pourcho/Bouse Small Group heard about Brittany and the work she was doing. And they wanted to help. So, the group purchased Chik-fil-A meals, not just for Brittany, but for everyone working in her unit: physicians, nurses, and custodial staff. 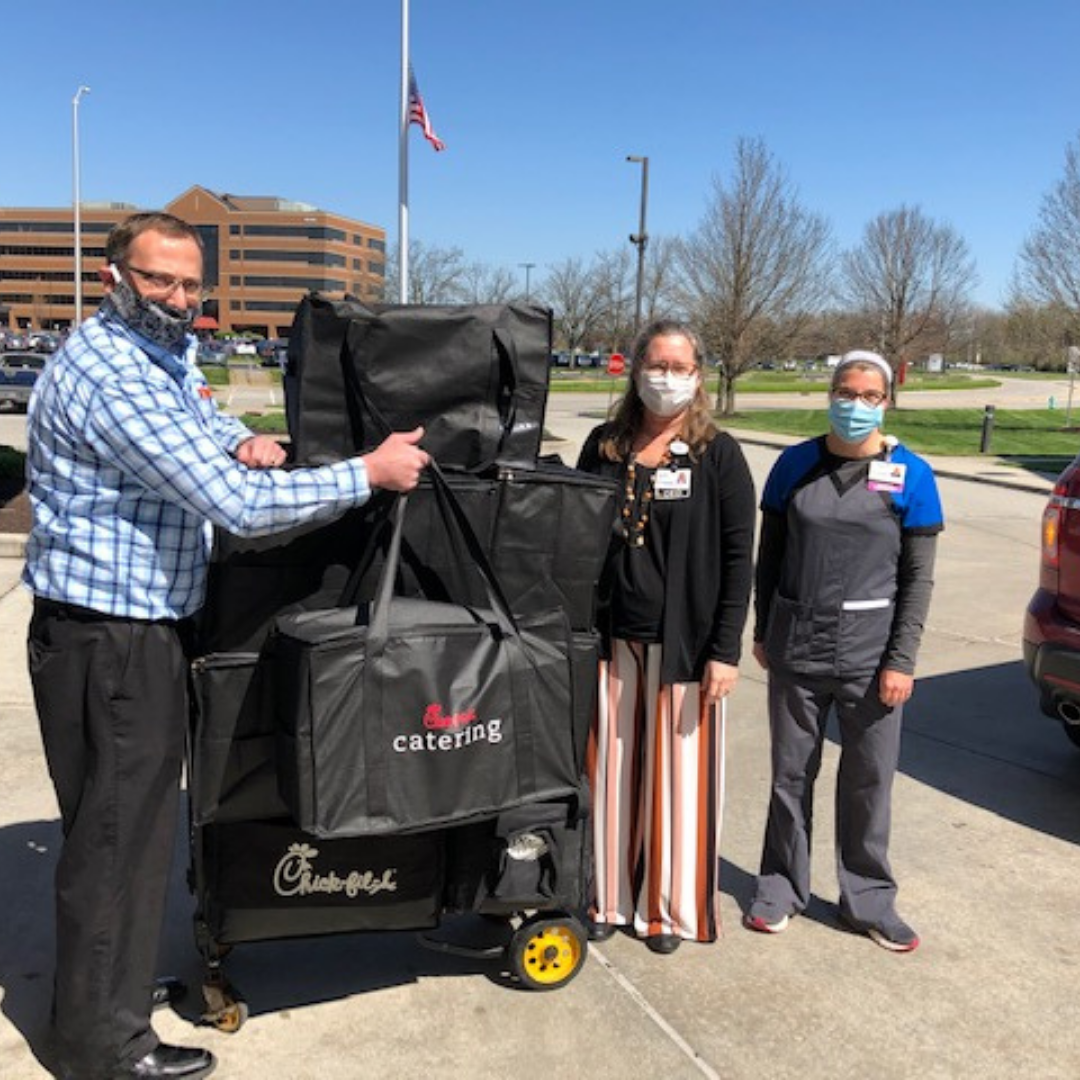 “Lunch breaks are typically our time to relax and take a break, so it was really nice to have a yummy, hot meal to enjoy together,” Brittany says. Not only did the food meet a tangible need, but it also opened doors for Brittany to connect with her coworkers on a deeper level and even meet other College Park members who work at the hospital. “After the meals were provided, I was able to talk to my manager and he told me that he was also a Christian.” He even encouraged Brittany to integrate her faith in the ways she cares for her patients.

“I just want to say that I am really grateful,” Brittany shares. “The church has helped meet practical needs [and made] sure that frontline workers are safe, providing not just for the body of Christ but for the whole community as well.”

The Church Is Not a Building

Number of countries reached during COVID through our livestream services

For most of us, life will forever be categorized as B.P. or A.P.—Before Pandemic or After Pandemic. The same is true at College Park. The pandemic brought drastic changes to ministry, and in the difficulty, God has worked in incredible ways. Flashback to March 15, 2020—the first all-digital COVID service. The “pews” looked a bit different, but God used that to spark spiritual growth during a hard season.

During the twenty-one Sundays that College Park was closed for in-person services, more than 45,000 people in 57 different countries tuned in to the website livestream.  Although many, like Lynsie on Facebook, expressed a “longing to sing alongside [the church in-person] again,” there was also a desire to use this season for good. As Frank shared online, many were committed to not “let the devil use COVID to his advantage.” By God’s grace, we didn’t. We stayed connected through a biweekly Facebook video strategy we called “10/2”—allowing for regular touchpoints with our staff team. We maximized video chats to continue (and launch) classes, Small Groups, and Bible Studies. We even mobilized our pastors, elders, and deacons to call church members—providing prayer and community over the phone.

During a year of much loss and hardship, we saw God open doors to many new opportunities. To meet the needs of our frontline workers, we launched a medical ministry and new initiatives to support teachers, students, and older adults. More importantly, we got to share the gospel with many of those individuals—and others around the world—for the first time. It all happened because our God uses hard things to bring about good. Hard is not bad, as Pastor Mark often says. Hard is hard. And during 2020, God has shown us hard can provide opportunities to platform the gospel in new ways. 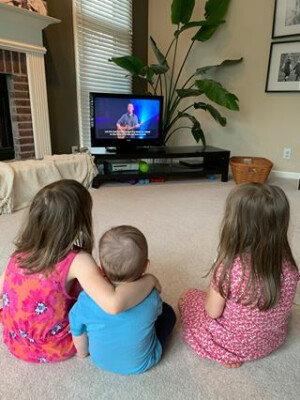 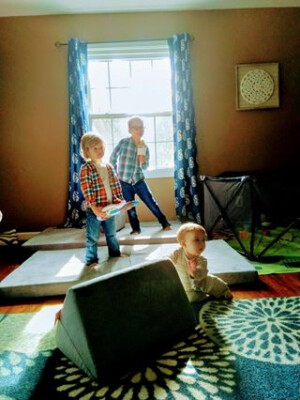 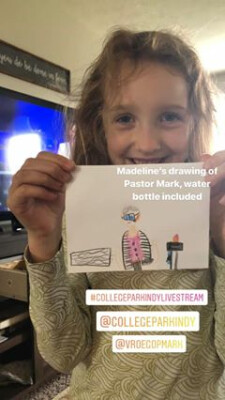 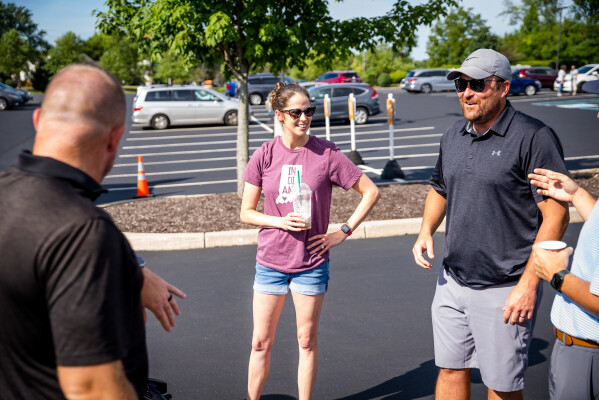 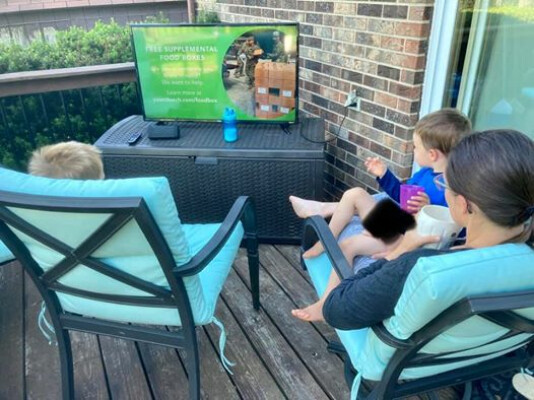 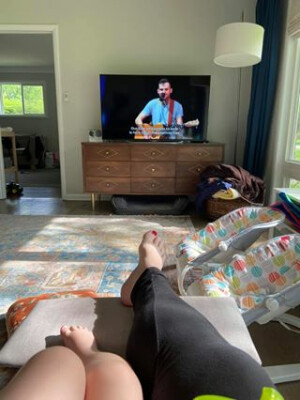 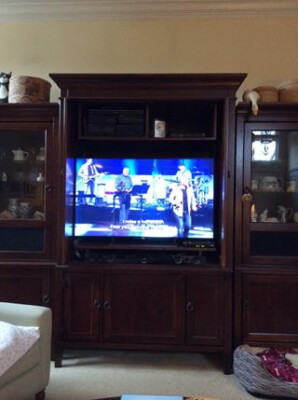 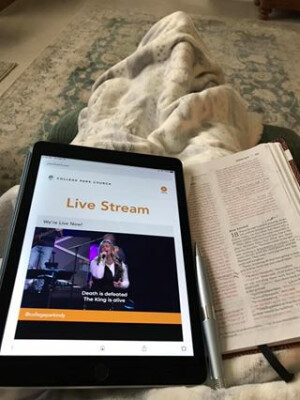 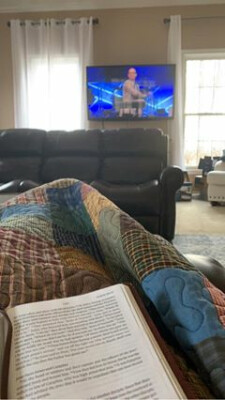 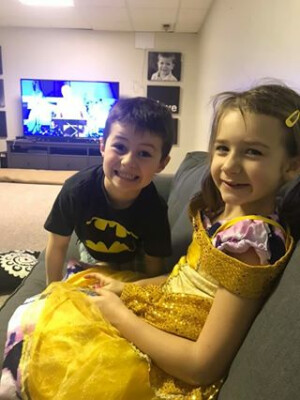 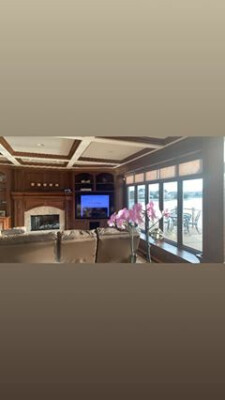 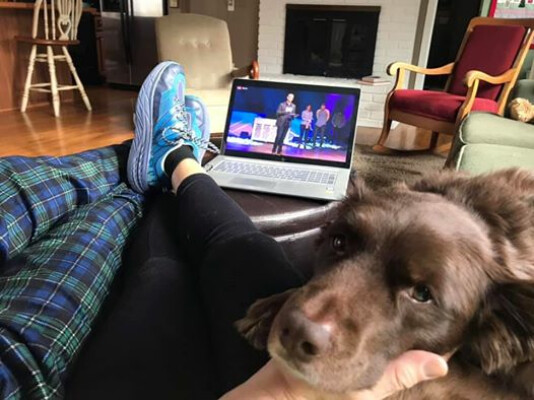 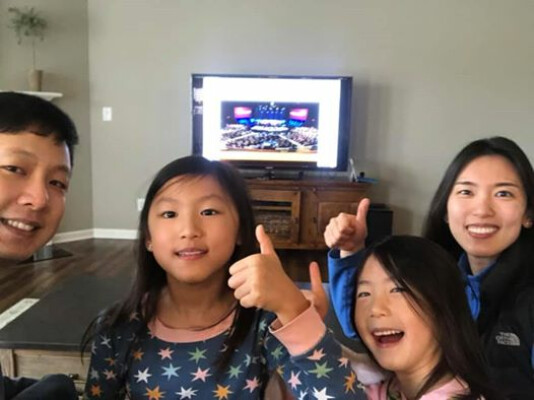 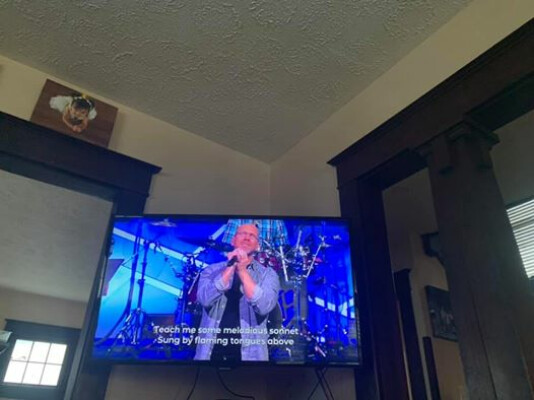 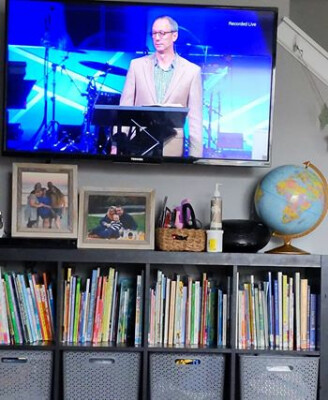 "Amen and Praise the Lord!"

The Church is built on the backbone of unsung heroes; people who pray diligently, serve faithfully, and live out the gospel without recognition. People like Vada Lyles.

Vada was born in 1947 and accepted Christ at an early age. As she grew, so did her passion for the Lord. In fact, it’s one of the first things that Kathy Valcore noticed when she met Vada on a Sunday morning in 2008. “The love she had for her Savior and for people was infectious,” Kathy says. “She was a precious sister in Christ.” Vada and Kathy quickly became friends. Each Sunday, they prayed during the middle service in the Throne of Grace Room. For more than ten years, that was their routine. And while many people came and went over the years, Vada and Kathy faithfully continued their Sunday routine.

Prayer ministry was only one of the ways Vada served College Park though. “I would first see her on Sunday mornings around 6:30 a.m.,” Pastor Don Bartemus recalls. 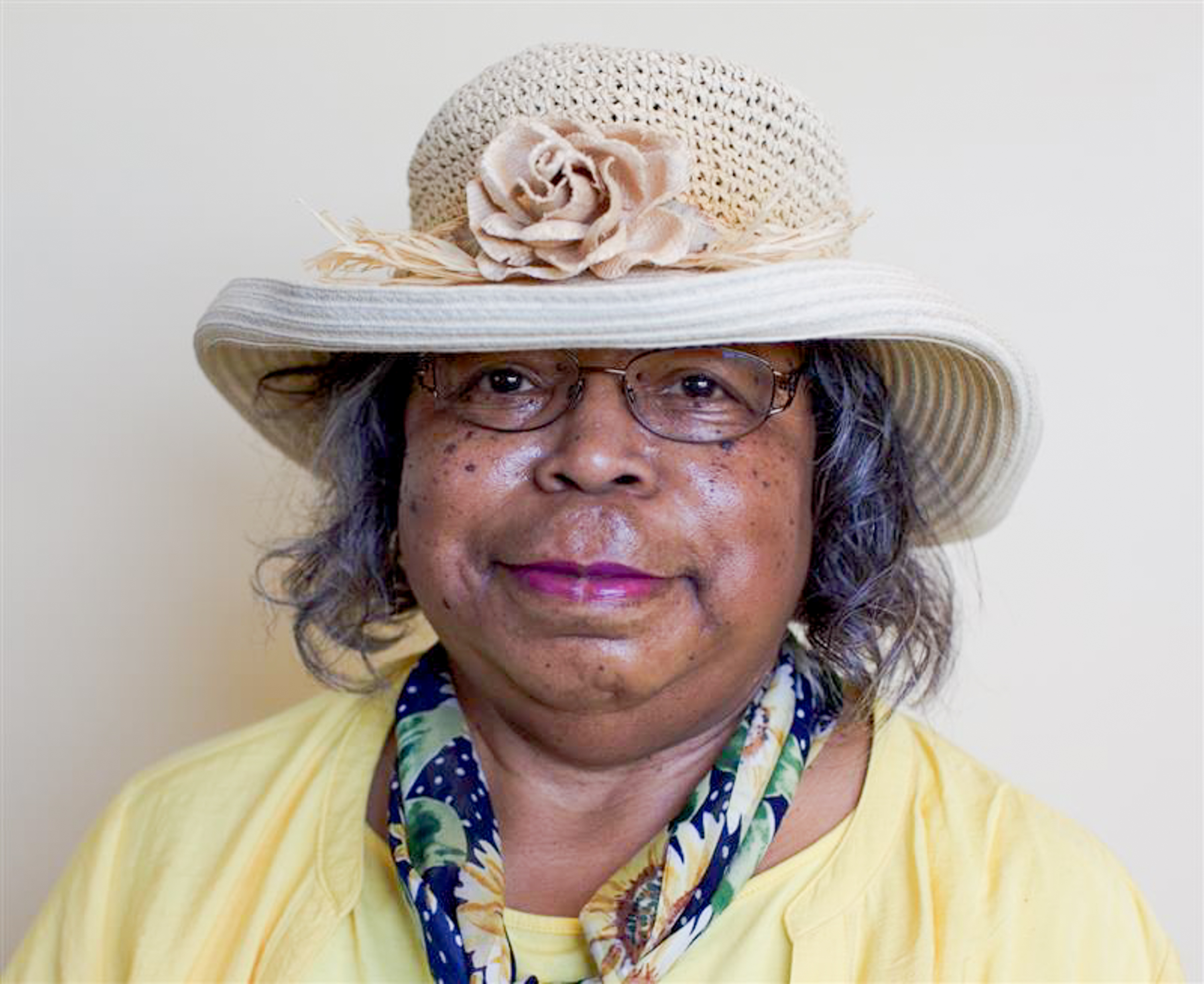 “She would be pushing water and coffee around the Next Steps Area, serving however she was needed. That’s just who she was.” More than just stepping up, however, Vada also stood up. She stood any time the Bible was read, even if that meant she was standing alone in a room of thousands. “She believed so strongly in the authority of the Word that [she’d always stand],” remembers Director of Women’s Ministries Karen Pourcho, who also saw Vada’s love for the Word during Women’s Bible Studies.
Vada passed away from COVID-19 on April 26, 2020. And while she's no longer with us, Vada's legacy lives on. Vada was known for her sweet smile and elegant hats. Yet, more than anything it was her declarative and oft-repeated "amen and praise the Lord!" that best marked Vada's life. Now, we trust that those words are echoing through heaven just as they echoed through College Park.
“She was steady as a rock,” Pastor Don says. “And our lives are a whole lot better because of Vada Lyles.”

When it comes to ministry, we plant seeds and water as best we know how, but it is God alone who brings growth. During a very abnormal year in Children’s and Student ministries, that truth was clarified more than ever. Whether meeting in-person with precautions or online with resources, digital teaching, and Zoom meetings galore; parents, students, children, and ministry volunteers shifted their approach during 2020. As a result, they’ve seen God bring new growth.

Meet the Student Worship-Leader Team. In January 2020, a team of four high school students began meeting to learn about worship and plan the worship time for Sunday night Student Ministry gatherings. The meeting style varied between in-person and digital. Yet, the impact was felt by the students and the student leaders alike. “It has been a blessing to have this group... I have learned so much about what it means and looks like to worship Jesus with my heart, mind, and body,” said Ruthie Seals, a twelfth grader and one of the worship leaders for Students. A stage full of teen musicians and a production crew of seventh graders?  Yes indeed!

Meet the Leatherwood Family. Dan and Dee Dee Leatherwood and the teens in their home depended on digital resources during 2020. God used Zoom Small Groups, a digital Senior Sunday 2020, and regular YouTube teaching to sustain their teens. The investment of the church to come alongside parents is something that the family feels incredibly blessed by. “We have been reminded that although the discipleship of our sons is an investment that we are responsible for as parents, we need the men and women of Student Ministry to walk alongside us!”

Meet Jenny Williams. Jenny; her husband, Matt; and their three kiddos were greatly helped by the digital ministry during the pandemic as well. “Our kids were giddy to watch their teachers sing and teach their lesson from home each week,” Jenny remembers. “Especially as parents of a newborn who were low on sleep, we were very blessed by each teacher who took the time and care to continue pouring into our kids!”

Praise God for the seeds of hope planted in the hearts of children and students through technology and creativity.

A Word from Pastor Bruce

Click the video below to hear a recap of the 2020 finances from Executive Pastor of Operations Bruce Smith.

To view 2020 financials, download the pdf Annual Report below 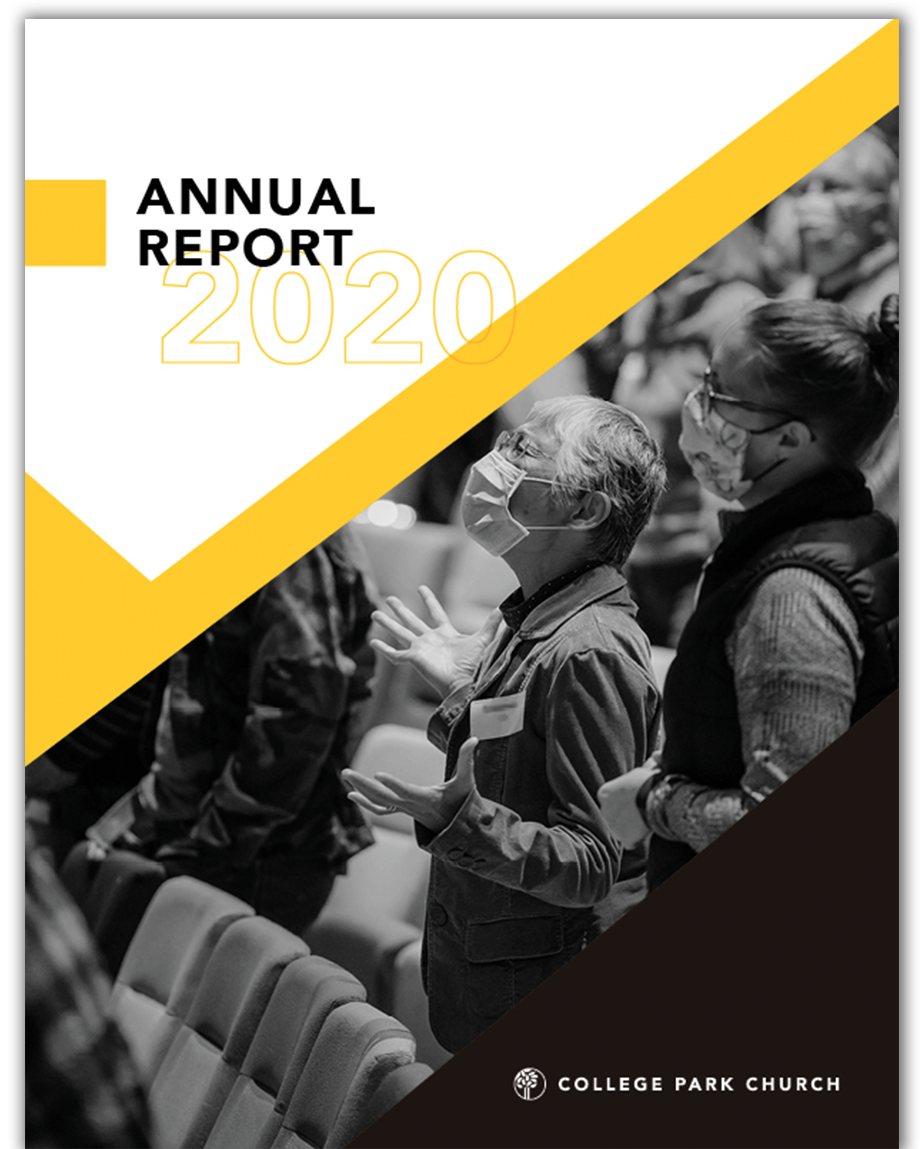 Special thanks go to Adam Kramp, author of "Meeting Needs on the Frontlines," and Jodi Harvey, author of "Intentional Discipleship of Children & Students."